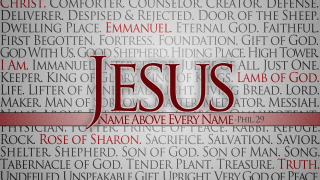 In 2003, I didn’t have a clue that Jesus’ name was literally above every other name that could be named on earth. I had no clue that it was a name that had power in it or that it was for my use in my life to speak over mountains so they would be cast into the sea. I had no idea that I could use it in my family’s life while praying over them or for them. I had no idea I could share it with strangers at the grocery store and see them be healed.
In 2003, I was blind. I knew there was a God who loved me, but I wasn’t convinced that He was for me. I had no idea that He had left me with the same power that raised Christ from the dead.
From August of 2003 until about November of 2005, I dug into the word of God daily, searching and striving, hungrily devouring every page and every word. I would be in awe of who God is, who Jesus is. Hebrews says that Jesus is the exact representation of God.
I had an idea of who God was from the Old Testament and what I had been told by my church. I had an idea of who God was. I thought He was a God who was on a throne, dictating and controlling. He was kind of our puppeteer, if you will. Yet how could He be controlling a stepdad who was abusing his daughter? How could He be controlling my behavior? How could He be willing to put me through all of that? I’ll tell you how. He wasn’t. He was not.
He is a God who is sitting on a throne and sent His Son, who loves me so much, to bail me out. He sent His Son through every temptation that I would ever walk through. He left His Son on the cross to die. When Jesus ascended to be with God, He sent His Holy Spirit to come and live inside of me. He sent a piece of Himself to live with me, inside of me. It is a deposit guaranteeing my inheritance. Once He puts it in, He is not taking it back until He returns. It’s fully mine. I have full ownership of it. It’s part of who I am. I am in Him, and He is in me.
When you look at the attributes of what comes with the Holy Spirit, you see power. It is delegated power from God. It is like the alien mother ship sent me down as an alien, part of His kingdom, to take back this world. Hello? Yes.
He didn’t do it so I could spend every single day suffering and worrying about myself and taking care of myself. He gave me the same power that raised Christ from the dead and the name of Jesus Christ, which is a name above every other name, and the authority to use that name so that I could live life to the full and share it with others. How do people know we are His disciples? They know by our love. Amazing! Oh my goodness. I had no idea.
I was not taught in church that Jesus’ name was above every other name and God had given me the authority to use it. It’s not my name. It’s the name of Jesus. It’s what He did for us. It’s the finished work He already completed. I have it. I have the opportunity to exercise it. I can have a trial come into my face—a sickness, a doctor’s report, bills, strife, teenage rebellion—but it cannot contain me. It cannot take me.